Join a Worldwide Community of Scooterists! 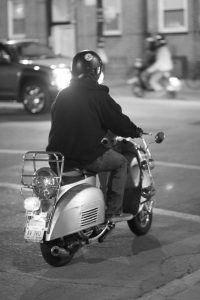 The Vespa’s utilitarian and economic benefits were immediately obvious upon its 1946 debut, and riders quickly embraced the social aspects of scootering. Local scooter clubs were formed to organize rides, races, tours, mechanical co-ops, and social events. Scooterists found common bonds beyond their choice of transportation. These local clubs soon grew into national organizations.

Scootering’s popularity in the United States ebbs and flows, but there has been a devoted community of scooter enthusiasts riding, wrenching, collecting, and evangelizing since the 1950s. The VCOA is America’s longest-running national club, approaching its 30th anniversary. VCOA-Chicago is one of the VCOA's first (and largest) local chapters, with about 50 members.

Whatever scooter you ride, VCOA-Chicago invites you to join the diverse Chicagoland scootering community. We encourage you to get involved, get excited about scootering, and become a part of scooter culture’s rich history.

Subscribe to our monthly email newsletter to stay on top of Chicago-area rides and events.

Events with a blue flag are organized or sponsored by VCOA or VCOA-Chi. Other events are posted for reference.

Join thousands of American scooterists in the VCOA! National membership includes VCOA-Chicago membership and goodies, Sign up today for the following benefits: